On May 5, we had the Finals for the 2015 Law Day speech contest at the Viewpoint Room at the West Bay Marina.  We were hosted by the West Olympia Rotary who, as always, provided a warm crowd for our student presenters.  This year’s topic focused on the issue of immigration.  We asked the students to first identify and discuss any problems that they perceived with our current national immigration policy.  Then, we asked that they design a solution to the problems that they identified.  We had a preliminary round on April 20 and had local high school students participate from Olympia High School, Capital High School, Tumwater High School, and Timberline High School.  The preliminary round was attended and scored by TCBA Board Members Lenny Lucenko, Terry Church, Larry Jefferson, and John Skinder.   Judge Hirsch, Judge Dixon, Judge Price, Judge Schaller and Judge Wilson also attended and scored the preliminary round.   Selecting the top three finalists was a challenge because the presenters had many innovative ideas which were presented with poise and conviction.   Bella Hood, Gracie Anderson, and Nate Wertjes advanced to the Finals.

All three students were impressive in their presentations at the Finals.  The audience cheered and applauded after each student finished.  After the speeches concluded, three speech judges were selected representing the Rotary and the TCBA.  After deliberation, Third Place was awarded to Gracie Anderson who is a Sophomore at Olympia High School.  Second Place was awarded to Bella Hood, a Sophomore at Olympia High School.  And, the winner of the 2015 Law Day Speech Contest was awarded to Nate Wertjes, a Junior at Tumwater High School.   The TCBA presented scholarship money to each Finalist ($800 for first place, $600 for second place and $400 for third place) and the Rotary provided each of the Finalists with a commemorative plaque.  It was a great event!

If any members would like to participate in this awesome event next year, please let John Skinder know of your interest.  He can be reached at the Thurston County Prosecutor’s Office or feel free to e-mail Heather at TCBA@nullgmail.com 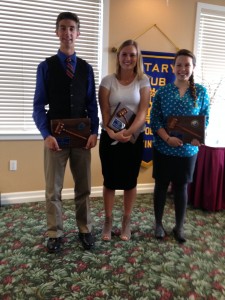